SMU played host to the Gauteng Department of Social Development during the commemoration of the International Day against Drug Abuse and illicit trafficking on 26 June 2022. This day has been declared by the United Nations with a purpose to mobilise the world communities to fight the scourge of drug abuse.

An impressive array of speakers and entertainers headlined the event. Mr Khulekani Cilli, a gospel singer and a former alcohol addict who has since kicked the addiction, sang inspirational gospel songs while also
encouraging those who attended to emulate his example of being sober. He revealed during the occasion that he lost two houses and three cars as a result of substance abuse. The KeMoja group also performed a play and recited poetry during the event.

Speaking in his capacity as the Councillor of Ward 31, where SMU is located, Councillor Tshepo Kgatle appealed to the community to change their attitude towards drug addicts and view them as people suﬀering from substance abuse disorder and not criminals.

Giving a welcoming address on behalf of the Vice-Chancellor, SMU Chief Operating Oﬃcer Mr Mfanﬁkile Sibanyoni told attendees that the University as an institution that primarily, specialises in health sciences education is confronted by the challenge of illicit drugs both, in its research activities and in practice. “We ﬁnd ourselves having to deal with the trauma and many after eﬀects of drugs- from people across the spectrum”, said Sibanyoni.

“Drug abuse is a major social problem with signiﬁcant impacts on both the social and economic aspects of any country and the world. The ﬂip side of the technological advancements that we witness today is that they also enable trading in illicit drugs. As an institution of higher learning, we have a responsibility to use our expertise and the technology, at our disposal, in the ﬁght against this scourge. Given the magnitude of the problem, we acknowledge that we cannot do this alone. Equally, we acknowledge that government on its own cannot successfully deal with this problem. Collaborations such as demonstrated by this occasion provide a platform and the sharing of resources which will enable us to do more with less”, emphasised the COO.

Ms Desary Carlinsky, the Acting Director, Abuse Prevention Treatment and Rehabilitation said “the change we want to see, in the war against substance abuse, starts with ourselves, as a community”. She said she came to SMU to commemorate the International Day Against Drug Abuse and Illicit Traﬃcking and to form lasting partnerships and networks with all service delivery partners in addressing drug challenges.

Dr Moliehi Matlala, the Acting Dean, School of Pharmacy, said participating in the commemoration event is part of the School of Pharmacy’s community engagement programme. She added that illicit drugs are not the only problem, even medication such as Codeine and Tramadol in the hands of school kids, end up being used as drugs and in time become gateway drugs towards illicit drugs.

Ms Dereleen James, a Central Drug Authority member, shared with the audience her experiences of her son who overcame drug addiction and has been clean for six years. She called upon the community to close ranks and work together because substance abuse disorders do not discriminate as they happen to the best among the community.

Prof Kebogile Mokwena, the NRF Research Chair: Sub- stance Abuse and Population Health, said “as a society, we are responsible to look after those among us who are vulnerable. Nyaope addiction cannot be treated in the same old way as alcohol addiction has been treated, in the past. There is a need to embark on evidence based ways of treating this disorder”. She challenged Gauteng Social Development to open their doors for partnership to enable her and other researchers to access funding to conduct research which will beneﬁt the society and address the scourge of drug abuse disorder.

Delivering a keynote address on behalf of the provincial government, Deputy Director General at the department of Social Development Mr Onkemetse Kabasia said there must never be a time to retreat and everyday should be declared to ﬁght substance abuse. “When we are sleeping, drug lords and peddlers are hard at work”, he said. Kabasia also mentioned that a trend has emerged where criminals are targeting students from the primary school level up to tertiary institutions to avail drugs to them and in the process destroying the hopes and aspirations of the future of the country.

“We continue to make signiﬁcant strides in ﬁghting drug and substance abuse through programmes such as ‘Ke Moja’, I am ﬁne with drugs. He encouraged those who are facing substance abuse challenges to check themselves in their nearest facility as government has availed resources to help those in need. He further said that on average, 40 000 people are treated yearly and the department is committed to reaching its target of treating 8 million people by 2024.

This day is supported by governments, organisations, communities and individuals all over the world, to promote the awareness of dangers associated with illicit drugs. This day enables diﬀerent communities to create awareness’s of illicit drug trade, drug smuggling and illicit tobacco consumption, because the communities at local level, are in the battle against alcohol tobacco and other drugs.

The Gauteng City Region Anti-Substance Abuse Strategy 2020 – 2025 prioritises services to young people and especially Institutions of Hi her Learning. The implementation plan is geared to the:

Development and implementation of Prevention and awareness programme; 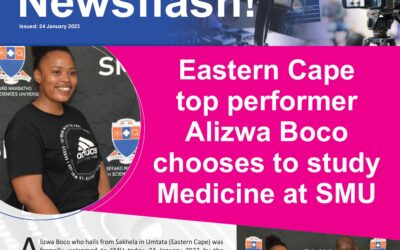 Alizwa Boco who hails from Sakhela in Umtata (Eastern Cape) was formally welcomed to SMU today, 24 January 2023 by the management of the University led by the Registrar Dr Jeﬀrey Mabelebele and the Deputy Dean of the School of Medicine Prof Risenga Chauke and other...

Notice to First Time Entering Applicants for the 2023 Academic Year

Notice - Selections and Admissions: First Time Entering Applicants for the 2023 Academic Year We would like to start off by thanking you for choosing to study at Sefako Makgatho Health Sciences University (SMU). As a way of keeping you informed about the timelines for... 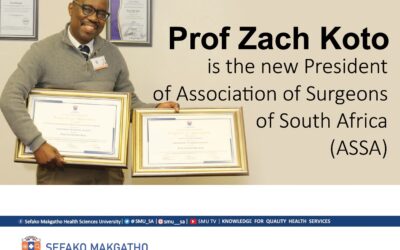 Prof Zach Koto, Head of Surgery at Sefako Makgatho Health Sciences University, was recently elected as the President of the Association of Surgeons of South Africa (ASSA). He wants to see ASSA grow to a point where it also mentors young surgeons apart from looking at...